Wendy grew up outside Yass, NSW on a sheep farm with her family. She was no stranger to the outdoors or guns. Picking up a gun for the first time around the age of 13, and practicing on the local  snakes. Wendy has been a local country girl her whole life. Met and married a local farmer, Tony and moved to Bowning, NSW to raise their three children, Elizabeth, Glenn and Tracey.

Wendy competed in her first nationals in Tasmania in 1996, only getting to shoot off for the ladies Single Barrel, her first meeting with Nanette McCallum (another Hall of Fame Inductee). Wendy won her first State title in NSW winning the NSW Ladies Double Rise Championship.

1997 saw her achievements increase by winning another two NSW State titles which included, ladies Double Rise and Double Barrel and first place in A Grade for Double Barrel. Wendy also won her first ladies high gun at the NSW State carnival and represented Australia at the Oceania Games in Adelaide where the ladies team came second.

In 1998 Wendy won another two NSW State titles, ladies Points Score and Single Barrel. She also picked up her first two national titles at Perth in the Deauville Doubles with her husband Tony and the ladies Double Barrel and made her first of many ladies Mackintosh team.

2002, what a big year that was. Another three NSW State ladies titles and the ladies high gun. Wendy also made her second ladies Mackintosh team. Wendy and her family headed over to New Zealand to compete in the 5th World DTL Championships. This was her first World DTL competition and she ended up finishing in first place in the ladies section and beside her on the podium was her daughter, Elizabeth in third place. In fact the whole Barton family headed over to compete except little Tracey who watched from the side lines and all making the finals. Whilst in New Zealand, representing Australia in the ladies team, taking out first place and making her mark on the New Zealand nationals by winning the ladies Single Barrel event.

Even though Wendy doesn't shoot as much as she would like, and when she does, she doesn't seem to have lost her touch. Wendy is still winning events even though her health is not optimal, she can still get up there with the best of them. In 2016 at the NSW Trap carnival, Wendy won the ladies Double Barrel and Points score events. It goes without saying, you can't keep a good woman down. 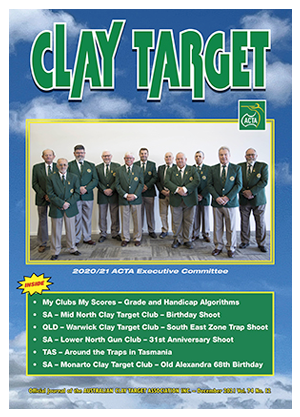