The ladies Taipan Shield event came to life back in 1974 and was introduced by Elva Churches who passed away in February 2015 at the age of 95 years. Elva and Sid Churches were the proprietors of Taipan Gunshop at Edwardstown in South Australia. The shop operated from 1967-1980 and was the storefront of the Taipan Projectiles Manufacturing plant, established in 1946. Elva was a very keen clay target shooter, becoming involved from around 1970. She continued to shoot competitively up to about 1990 and then socially up to 2005 at age 85. Elva first joined the South Australian Gun Club as well as Mallala, Alexandria, Southern and International, being a life member at many. She was the state handicapper for SA for many years during the 1970's.

After competing in a car shoot at Griffith NSW around 1972 where there were a couple of other woman competitors, Elva came up with the idea of a postal shoot for woman. She reaslised there were many woman that wanted to shoot clay targets, but didn't necessarily want to learn clay target shooting shoulder to shoulder with men. Postal shoots are not a new idea and Elva through her pistol shooting years 1948-1972 had competed in a few over that time and knew how they were run. However in the world of Clay Target Shooting, a postal shoot for women was new, and she was told by more than a few blokes "that won't work". She had a can do attitude which annoyed more than a few blokes over the years.

Thus the Taipan Shield was born and the first event held in 1974 and is still going today. Information kindly provided by Barry Churches 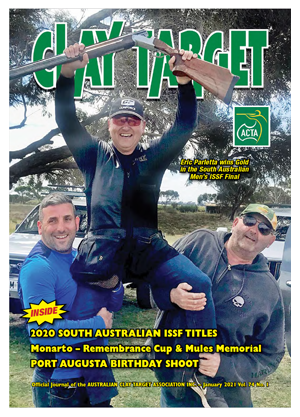